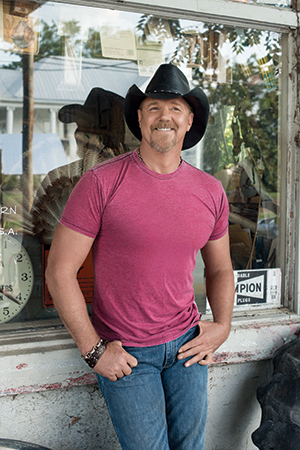 Wendell, NC – On the past season of NBC’s hit show All-Star Celebrity Apprentice, multi-platinum country singer Trace Adkins was crowned champion and proudly presented a check to his charity of choice: The American Red Cross.

In the season opener, Adkins was tasked as the project manager for his team Plan B, where they sold meatballs to big donors. KIOTI Tractor came to that event and contributed to the donation pool for the American Red Cross to assist Trace Adkins in his fundraising efforts in the first challenge. James Little of Little Tractor and a KIOTI representative travelled to New York City last year during the taping of the show to present a check to Chase on behalf of both companies. Little Tractor, located in Metropolis, Illinois, is Adkins’ local KIOTI Tractor dealer where he has been a longtime customer. Adkins owns several pieces of KIOTI equipment including CK compact tractors, DK utility tractors and a pair of KIOTI MECHRON® 2200 UTV’s.

Throughout the entire Celebrity Apprentice season, Adkins was committed to his American Red Cross fundraising cause and, with the help of generous donors, raised over $1.5 million during his winning run on the show. The American Red Cross assists those in need across the country from a natural disaster that devastates thousands, or a home fire that affects a single family, the American Red Cross provides help and hope to those who need it most.

The competition was very close up until the very end, but Trump ultimately crowned Adkins as the winner of All-Star Celebrity Apprentice. Congratulations to Trace! You have many fans at KIOTI Tractor.

To donate to the American Red Cross visit www.redcross.org or for more information on Trace Adkins visit www.traceadkins.com.

About Trace Adkins
Grammy-nominated Trace Adkins’ trademark baritone has turned albums into Platinum plaques, with over 10 million albums sold, cumulatively. The member of the Grand Ole Opry has a hit list that includes “(This Ain’t) No Thinkin’ Thing,” “You’re Gonna Miss This,” “Ladies Love Country Boys,” “Songs About Me,” “Honky Tonk Badonkadonk ,” “I Left Something Turned On At Home,” “Every Light In The House,” “Hillbilly Bone (Blake Shelton and Trace Adkins),” “Hot Mama,” “I’m Tryin’,” “Just Fishin’,” “Then They Do,” “Chrome,” and “More.” In 2011, Trace’s album, Proud To Be Here debuted atop the Billboard Country Chart and his eleventh studio album, Love Will… was released May 14, 2013 on Show Dog-Universal Music. He a television personality whose integrity and wry humor served him well when he was named winner of NBC’s All-Star Celebrity Apprentice in May 2013 with over $1.5 million raised for the American Red Cross. He created and hosted GAC’s “Great American Heroes,” series that honors great deeds by every-day Americans and, for three consecutive years, he has hosted FOX’s American Country Awards. Additionally, Adkins is a spokesman for the Wounded Warrior Program, the American Red Cross and has performed seven USO Tours. He was humbled to serve as Honorary Grand Marshall in the 2013 Memorial Day Parade in Washington, DC. As an actor, Trace has played a tough as nails biker in The Lincoln Lawyer (starring Matthew McConaughey) and as an author, the 6’6″ oil-rigger recounted his rise to fame, brushes with death and battles with personal demons in his 2007 autobiography, A Personal Stand: Observations and Opinions from a Freethinking Roughneck.

For more than 35 years, KIOTI Tractor has been supplying tractors in the 22-110 horsepower range to the U.S. and Canadian markets. Today, the company offers a full line of compact tractors, utility vehicles, zero turn radius mowers for both residential and commercial use and is expanding into compact construction. Headquartered in Wendell, N.C. and with additional distribution centers in Texas and Canada, KIOTI is committed to providing equipment that is durable, reliable and easy to use. KIOTI customers benefit from an extensive and growing dealer network that’s dedicated to superior customer service across North America. For more information on KIOTI or KIOTI products, please visit your authorized KIOTI Tractor dealer or www.KIOTI.com.